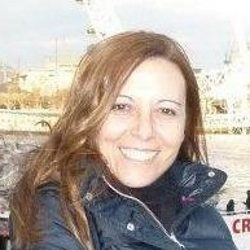 Silvina was born in a small city in the province of Buenos Aires, Argentina. Passionate about children and sports, she chose to obtain an education degree with a specialty in Physical Education.

While studying, she worked every summer in schools with children from low-income families, whose ages ranged from 3 to 12 years.

During her third year of study, Silvina taught a group of Mapuche children in a humble school in a town in Neuquén (Argentina), as part of an educational cultural immersion project.

After completing her studies, Silvina worked in various levels of Education (infant, primary and secondary) as a Physical Education Teacher. Her main objective throughout was to help children learn to enjoy physical activity, and activities in nature. She wanted the children to learn to care for and respect their bodies and the environment. To this end, Silvina worked with colleagues and families to organize outings and camps where the children, in addition to playing, explored nature with guidance from their teacher who provided insight into the things the children observed and discovered.

Silvina also worked with a shelter for girls, where she worked closely with the girls to help them improve their self-esteem and self-confidence. She designed various programs to foster confidence and self-reliance. For example, the girls were given the challenge to obtain funding for a trip that they chose and planned completely on their own.

After a number of years, Silvina moved to Spain, where she applied her training in psychomotricity to work with aged 3 to 6. Silvina then accepted a position as a specialized teacher in Physical Education at a private school in Valencia where she worked with children from 6 to 12 years old.

Silvina wanted to better understand the children she was working with, and to be able to help them right away whenever an issue arose. To this end, Silvina completed a degree in Psychopedagogy at the University of Valencia. While at the University, Silvina also received credentialing in Valenciá which is the second official language of the Valencian community in Spain — Spanish is the other.

In 2012, Silvina moved to London, to learn English and to continue her education. To improve her English skills, Silvina took a position at a Nursery School in London. It was at this school where Silvina first came across the Montessori philosophy and method. Her attention was captivated as she observed the independence and confidence with which infants and toddlers moved inside and outside their environment.

In 2014, Silvina moved to Malta where she and her partner set up a nursery school based on the Montessori pedagogy and free movement for infants and toddlers. When Silvina became pregnant, she also became determined to learn more about Montessori in order to better guide the development of her son and of all the children she would work with in the future.

Silvina will lead the creation and implementation of Phase3’s toddler program. We are pleased that she is part of our exemplary education team.